Due to Rad-X Pictures increased popularity in the ad market, Tyler Nickerson, Rad-X CEO, has officially declared that soon a branch of Rad-X Pictures will be launched to target the ad market directly. The new subdivision will be called Skyline Advertising, and will focus primarily on creating poster advertisements, corporate promotional videos, and other advertisement-related products. Currently, Rad-X Pictures has produced two ads for Soltas Energy in New York City, one ad for the Nickersoft Corporation in Massachusetts, and smaller imaging projects for minor corporations. When released, the new company is said to have to following logo:

Rad-X Pictures produced its third music video this Tuesday, a song by Tyler Nickerson called "Forgive Me". The shoot took just over two weeks and has been uploaded to Tyler Nickerson's YouTube channel (instead of Rad-X Pictures' channel). The video can be viewed at http://youtu.be/lzBSEXj4ia0.

Rad-X Pictures' "What Happens in China" to Make Local Headlines 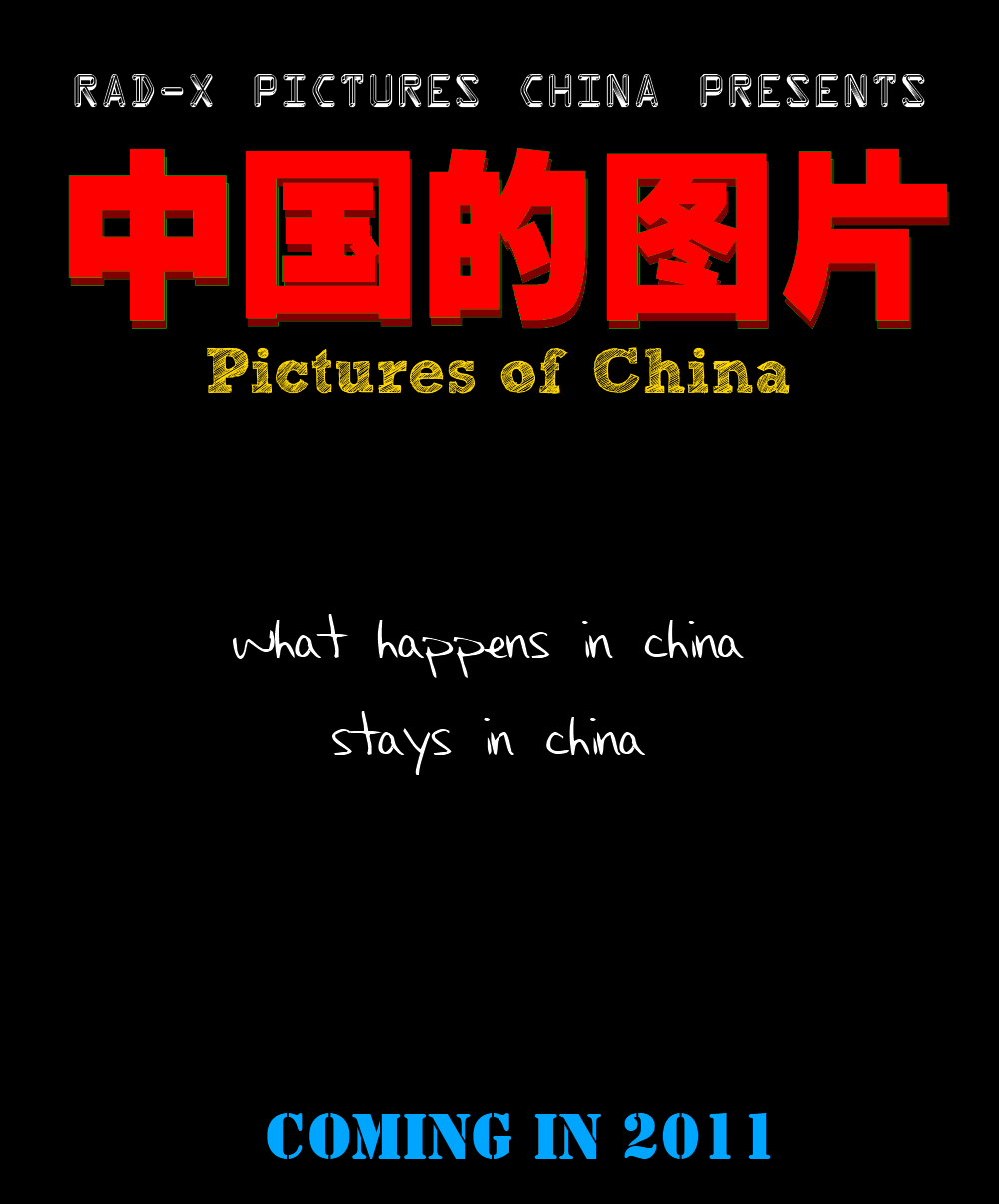 Rad-X Pictures latest film, "What Happens in China" hit theaters and DVD Wednesday after being premiered at the Eagle Hill Cultural Center in Hardwick, Massachusetts. The event captured the attention of a local reporter, who decided to write an article in the Worcester Telegram reporting the story. The premiere was a private showing among members of the trip and close family members.

As of December, the film had been produced using more than 4,000 video and image clips, over 50 songs, and over 120 hours of work. Originally titled "Pictures of China" (early concept poster left), "What Happens in China" came about in April of 2011, halfway through Nickerson's trip to China. Upon his return to America at the end of the month, he set aside his work at the Nickersoft Corporation (http://www.nickersoft.webs.com/), and put his efforts into making the film. He would spend the next five months creating a two hour and twenty minute montage of footage and images from the trip.

Sean DuBois, a film instructor at Quabbin Regional High School, called the film "a great gift to anyone who was on the trip and a major selling point for those who are thinking about traveling to China." Jeffrey Nickerson calls the film "incredible" and feels the music is timed perfectly with the footage. The film may be shown on local public access channels in the following weeks. To read the local article in which the film was featured, please visit www.telegram.com/apps/pbcs.dll/article?AID=%2F20111230%2FNEWS%2F112309664%2F1101%2Flocal. Below is an image of the DVD's launch poster as of fall of this year.

Rad-X Pictures is shooting their second music video this week for "Changes", a song by independent musician Tyler Nickerson. The video is the first to feature actors and a full-length script. The music video follows the story of Nick Andrews, a teenage boy from New England. He fights constantly with his mother about his girlfriend. In one particularily heated fight, he screams at his mother that he hates her then storms out of the house. He drives far away to a distant pond, where he sits and ponders his life. He declines a call from his girlfriend, then drives home and apologizes to his distraught mother.

It will be interesting to see such a concept come to life. Will post more as shooting progresses.

"What Happens in China" Premiere to be Rescheduled to Christmas

Due to some complications at the venue, Rad-X Pictures will be moving the premiere of their new film "What Happens in China" to December, 2011. The new venue will be at Eagle Hill Theater in Hardwick, Massachusetts between 11 AM and 2 PM. Only guests may attend.

"What Happens in China" DVD to be toned down a notch

Rad-X Pictures has recently began work on putting their new film, "What Happens in China", onto DVD. They had big plans in mind: completely interactive menus, numerous animations, and a behind the scenes tour on the making of the film. Unfortunately, reality has placed its cold hand on the progress of the documentary. Due to memory contraints, the DVD will now NOT contain the following:

The DVD WILL contain:

Ideas and Concepts for the Future

Here at Rad-X, we have been tossing ideas around as to what our next production will be. Here are a few concepts we came up with:

- DARE II (The Monster is back... only this time in disguise)

Scary Stories and A Crimson Christmas have already been considered... in fact, we already have a completed script for Scary Stories and the film was even attempted once. Unfortunately, it flopped. It doesn't mean we're not willing to try again! The Nonsense Movie and DARE II have just resided in our thought bubbles so far, and have yet to be attempted. It doesn't mean it can't happen though. Expect to hear from us on what our next project will be. See you then. 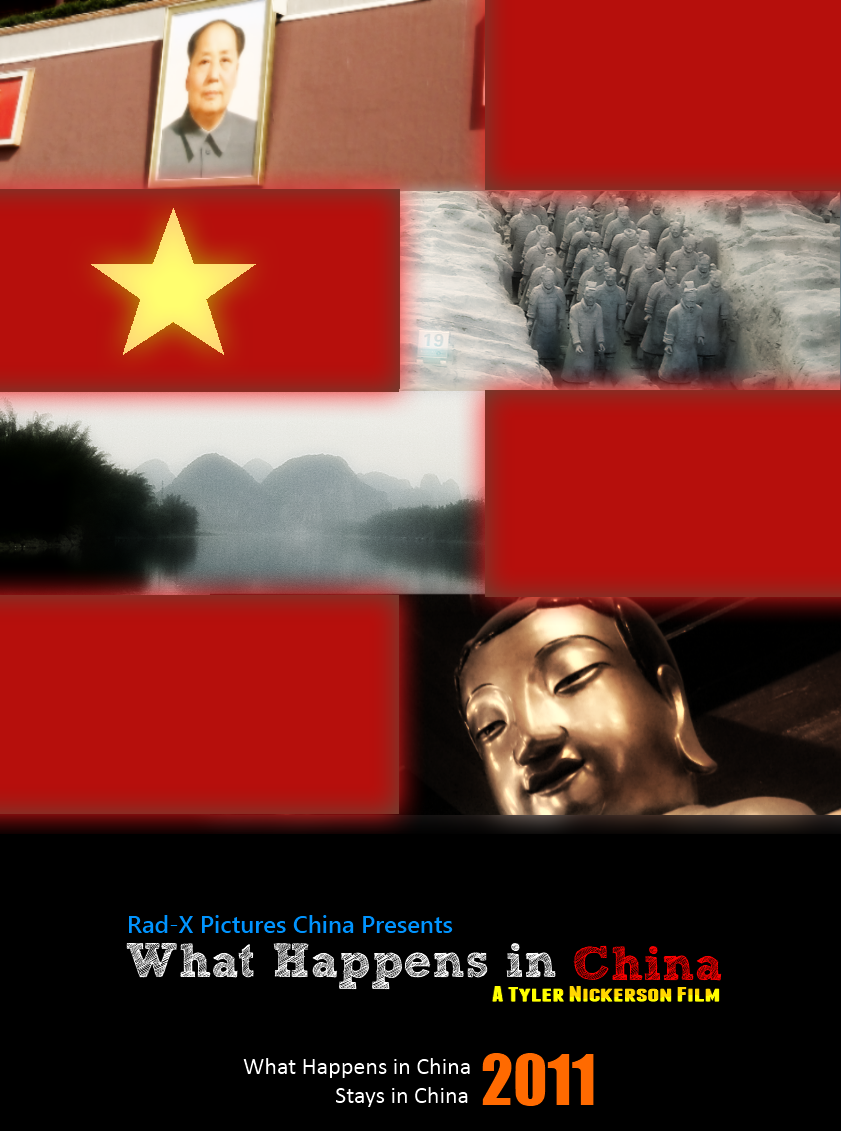 The team at Rad-X Pictures has reached the home stretch in their new film, What Happens in China. The film, directed by Tyler Nickerson, focuses on a group of teenagers from Quabbin Regional High School in Barre, Massachusetts as they travel throughout China. Based on a true story, the film takes place over the span of 11 days and features the cities of Beijing, Xi'an, Guilin, and Shanghai. The film is stimated to run roughtly two and a half hours and premiere in Barre, Massachusetts sometime this Christmas. Editors of the film report that they have edited 3 out of the 4 cities, and have now begun editing Shanghai. The editors use real footage and photographs taken by the students, and converts them into a theatrical format.

"The ending is sure to be very emotional," predicts Tyler Nickerson. "We're working our best to have the film finished and ready to premiere by December." The actual trip occurred between April 14 and April 24 at the beginning of this year, and editing has been in progress since May. "It's a very long process," said Nickerson. "You have to first make sure you have all the clips you'll need, then you must find the right music to fit the mood. You have to edit the clips, then render it. Finally you have to burn it to a DVD." Nickerson told the media that the film is being rendered in 4 parts. For those who don't know, rendering is the act of convert a multi-track video timeline down to a single playable file format. All of today's editing software has this capablity. Nickerson also mentioned that just Beijing alone (4 out of the 11 days) runs roughly 50 minutes. "I'd post content online," Nickerson added, "but that would just ruin the fun, wouldn't it?" I guess we'll all have to wait until the film is finally released this winter.

On November 26, 2011, Rad-X Pictures will premiere it's latest film "What Happens in China" at a high school auditorium in Barre, Massachusetts. Sources report that 30+ copies of the DVD had been made and published, and all copies will be available for public release on November 27. Overall, the documentary was filmed over the course of ten days, edited between April and September of this year, and holds a total running time of approximately two and a half hours. If you would like to preorder a copy, contact Tyler Nickerson at [email protected] The current pricing is $10 / DVD.